We all have our bad days, right? Yesterday was such a day. Nothing earth-shattering happened, just a bunch of little things converging at just the wrong time. Last night I spent 90 minutes backing up my entire hard drive because my laptop is an unreliable piece of <insert expletive>. That was not a relaxing end to a long, hard day. I love my computers when they work, and when they don't....well, let's just say that once my hubby had to pull me off of a laptop that I was jumping up and down on.

To amuse myself while everything was transferring to disc, I pulled out some really old pics of me. Wow, did those bring a smile to my face...especially this one...

This pretty much describes my Thursday, and what I wanted to do all day long. I didn't, though. I sucked it up and no one was the wiser.

Well, except my hubby who took one look at the picture and said, "Wow, you haven't changed at all, have you?" I'd say that's grounds for divorce, but I was laughing too hard to be mad. 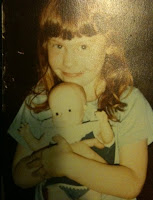 Suck It Up & Deal with It

On Monday, another publishing bomb was dropped. BookEnds, LLC, a major literary agency, is opening up to epublishing. That's right, they aren't just repping authors or allowing their authors to epublish, they are literally opening up a new arm of their company that will be an ebook publisher.

Read about it here.

I hope you didn't just read their post, but also the bajillion comments below it. This is how it read to me:

The one on top is Anonymous. The one on the bottom is anyone who thought BookEnds was doing the right thing.

Now I found all of the comments a little funny. You'd think I'd be the kid on top, right? I'm an indie author; I'm self-published. Was Anon right in some of the things she said? Sure. However, once she started attacking people, I became disgusted. Thanks for giving the rest of us a bad name.

Can any person on this planet with half a brain hire an editor, cover designer, and formatter? Sure. Can anyone do some/all of those things herself? Sure.

BUT IF SOMEONE DOESN'T WANT TO DO ALL THAT WORK, JUST WANTS TO WRITE AND ePUBLISH - WHO CARES?! It's the author's CHOICE!

Yes, there was a bit brought up about ethics, but as far as I've seen BookEnds is an extremely ethical lit agency and probably will be just as ethical an epublisher. But guess what? Any author who signs a contract with them shouldn't do it without the help of competent attorney. The author bears responsibility in this as well. BookEnds has been very open about what they're doing, except for the nitty gritty. Let them work that out with their authors. I'm sure if an author has a proven track record, their contract might be more favorable than yours. Is that fair? No, but it is business.

If I ever choose to work with an agent (never say never, right?), I don't want people yapping in my ear about how I'm a traitor or a cheater. Oh wait, that already happened to me when I decided to epublish. Yeah, some trad pubbed "friends" of mine called me those names. That's their petty problem, not mine.

You know what? I don't really care. I'm happy with my decisions and I hope other writers are too. Look at the amazing array of publishing options we have now. It's AWESOME! Take advantage of the options. Look at what suits your needs. Be realistic. Have fun. I know I am!
Posted by Megg Jensen at 1:23 PM 6 comments:

My most excellent friend James Tallett asked me to participate in a little blog debate with him on world building. You all know I'm a pantser (writing by the seat of my pants) and dear James is a plotter (one of those people who writes everything out beforehand and spoils all the fun of first drafting). For me, pantsing while writing is about the thrill of discovery. The hard work comes in revision. But first, read about James' plotting process, then head over to his blog to read about my pantsing process. I think you'll find that being a successful writer has little to do with taking the "right" path to completing a novel, but the path that suits you best.


I am, unlike Megg, a plotter. I design the world and all of the rules that exist in it before I ever set pen to paper (or fingers to keyboard) with regard to the plot of the main story. I usually start, although not always, with a new idea for magic. All of the fantasy settings I create are based around their magic, and the very shape of the world is created and driven by the magic that inhabits and lives within it. I'll design the new magical system in a couple days, focusing generally on the capabilities, and how common I think it is.
I do it this way because I feel that magic is the most important actor and differentiator in a fantasy setting. It is, in the main, what separates fantasy from alternate history. There are, after all, brilliant retellings of the military campaigns and intrigues of yesteryear, but none of them have magic. Thus I see magic as the root of fantasy, although I know there is much more that goes into creating the whole ethos of a fantastical world.
Once the magic is down and recorded, I set about building the world. Now, most of the time, magic determines this as well. For instance, if I built a setting around my Ferrous Timber magic system (Part 1, Part 2), there would be a fairly high degree of sophistication of metallurgy. Working backwards from that, it means larger cities and towns, and developed trade. Put together with the need for large quantities of fuel for metal smelting, and the setting, in general, would have a lot of wood and mountains, and probably a faint resemblance to central Europe.
So now that I know what kind of civilization would exist in the world, I pick up a pencil and start sketching various maps and continent shapes, until I have one that seems appropriate to the world. This map of the Splintered Lands was created by me doodling until I had a world that looked like it had been broken apart in a cataclysm. Then it becomes a matter of filling in the terrain and the major habitations. Foliage and mountains first, then rivers, then cities and towns. However, I do tend to leave large blank spots on the map, and only fill in the most important overall detail at this point. I am a plotter, and I don't start writing until I have a world firmly in mind, but I know the world that I create over the course of a week or so isn't the entire world of the story, nor will it ever be. Thus the need for blank spaces that can be altered according to the needs of the story.
Although I have my overall view of civilization by this point (it's dictated by magic, remember), what I don't have is the actual characteristics and locations. Generally, I put cities in the most central places, and then a ring of towns around them, and on the trading routes that link the cities. In the areas where there are no trading routes, or little in the way of towns, I dot some villages around, enough to show habitation, but not much more.
The characteristics of the population are driven by the terrain, and are adjusted by the needs of the plot. For instance, those in Bhreac Veryan borrowed a little from the Ottomans/Arabians (desert dwelling), a little from Fascist Italy (politics), a little Roman (partial military), and bits and pieces that I made up and bolted together. The Ottoman and the Roman thefts were because I thought it fight their in-setting location (Ottoman) and history as the overarching empire (Roman). The Fascist Italy is because they are portrayed as villainous in the first books and looking to recover the glory that was once theirs.
After that, I tend to shape the most visible pieces of a kingdom's equipment so that it suits the culture and temperament of the city to which it belongs. In my case, this is usually military equipment. Bhreac Veryan, for instance, harvests the plates off of large insects and sews them together to make lightweight plate armour, while Tri-Hauwcerton, another kingdom in the same setting, fashions theirs from overlapping layers of steel and stone, making it very strong but very heavy.
Now, you'll notice that I still haven't touched on religion. Personally, I tend to leave it out of world building, and leave characters to develop or mention a religion as they go along. Some do, some don't, but they all speak what they believe in.
So, there's a little look into the mind of a plotter when it comes to world building, and the process that he goes through. Now, sometimes, when I'm feeling just like writing, I ditch everything here and just write, but if it's a novel, it's getting the full treatment. I do not want to write myself into a corner because I didn't know the rules of the setting. Better safe than sorry, I think.
Posted by Megg Jensen at 10:43 AM 6 comments:

ONE
I’d never seen the three men with their necks in nooses before today. Their long red hair, braided and beaded, whipped in the breeze like a wildfire and their faces held as still as the stone carvings on the battlements of the castle. Besides the two other adoptees living in the town, I’d never seen anyone who had features like mine. These men could have been my uncles — not that I would know.
My heart pounded, my chest heaved with each deep breath, and I wondered when the execution would start. The horses nickered in the courtyard below, but their chatter was nothing compared to the low roar of the crowd. Their bloodthirsty cries twisted my stomach in knots. I didn’t know my homeland, had no reason to be loyal to it, but a small part of me felt something for those men. The resemblance between us was so strong. I wondered if they had my blue eyes too, but I couldn’t see that from so high up in the castle.
“Draw the curtains,” the queen commanded me. I squinted, trying desperately to see if their eyes were blue. I willed one of them to look up at me, reaching deep inside me for some remnant of the magic my people once had. Not one of them glanced towards me