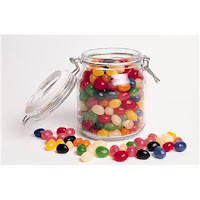 You've got to be wondering, What's up with the jelly beans?

You know those contests where you have to guess how many jelly beans are in a jar? Well, in honor of my release of Anathema I'm going to let you guys guess how many copies I'll sell of my book through March 11th!!!! (Hint - I've already sold 50!)

The prizes are listed below - keep reading because you'll want to win this contest!!!


You have to earn your chances to guess the total I sell.

Here's how to earn guesses: (You can pick & choose, you DO NOT have to do all of them.)
(must prove by emailing me a pic of you with the book or with your e-reader on Chapter Ten of Anathema - your picture may end up on my blog!!!! I cannot guarantee how fast Amazon will ship your book. If the contest is nearly over and your copy hasn't arrived, drop me an email.)
(if we're not FB friends, take a screenshot & email it to me or send me a friend request & tag me in the post)
(tag me, @meggjensen1, so I can see the tweet for verification)
(link to your post in your comment below)

No purchase is necessary to play. There are plenty of options above to play for free!

Add up your total and post a comment below, telling me how you earned your chances to guess & leave your email address so I can contact you if you win. Don't forget to guess how many copies you think I'll sell!!! You can enter as many times as you. Want to Tweet about this every day? No problem - just leave a new comment each time. I will be checking to make sure they are valid!!!


Family & friends are allowed to guess because let's face it, I have no clue how many books I'll sell by March 11th. It could be one (thanks, Mom!). It could be a million. No one has an advantage over anyone else!

So, I'm sure you're wondering, What will I win?

First Runner-Up
$25 Barnes & Noble or amazon.com gift card and a free copy of Anathema (an e-copy or a signed paperback, your choice)


Second Runner-Up
DarkSide Publishing gift pack: a free copy of both Anathema and Into the Shadows by Karly Kirkpatrick (your choice of e-copies or signed paperbacks)

If no one hits the number on the nose, the closest person will win. In the event of a tie, I will let my daughter choose names out of a hat.

Must be at least 18 years old to enter & win. Under 18? You need your parent's permission to claim the prize if you win.
Posted by Megg Jensen at 10:25 AM 33 comments: 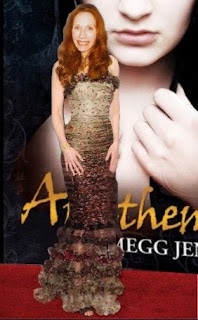 Want to know what I look like, dear readers? That is my face on Nicole Kidman's body. Her Grammy 2011 dress was my favorite and my awesome friend, Chris Whigham, of the G10 Writers, put this together for me with Photoshop.

Now you may be thinking that this is a total fantasy. Well, I am a natural redhead and my hair is only a few inches shorter than Nic's. (We're on a first name basis in my little fantasy here.) I am tall & thin, though I must say that her waist is impossibly small!!!! This actually could be me!!!

I'm not totally wasting my time while impatiently waiting for my paperback to pop up on amazon.com. Today I spent a couple hours working on edits for my writing colleague, and awesome friend, G.P. Ching. Her book, The Soulkeepers, is going to be a HUGE hit. Why? Because she's an amazing writer. I'm thrilled to read her book in advance. This is my second full read of The Soulkeepers and it's even better the second time around. Y'all are going to love, love, love it.

Okay, I'm signing off for the weekend. If my paperback isn't up by Monday and my contest doesn't go live, I may scream so loud that everyone in the continental U.S. might hear me....
Posted by Megg Jensen at 6:42 PM 3 comments:

Not Twiddling My Thumbs - REALLY! 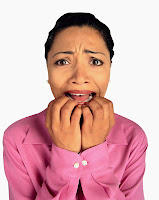 I have been on edge for the last two weeks. I want to officially launch my book, but there was a holdup with my paperback. Unfortunately something happened that was beyond my control and everything had to be resubmitted. I don't want to go into it or complain about any particular company, mainly because they were so good about correcting the problem. Unfortunately these things take time and here I am, eagerly awaiting my book launch.

If the e-books are out, why am I waiting? I want everyone to be able to participate in my contest, and that includes people who want a paperback. There is an element of my contest that involves people who purchase a copy of my book and it's not fair to leave anyone out.

The great news is that since I unofficially launched my e-books last week, I've sold 44 copies (28 e-books and 14 paperback pre-orders). I think that's fantastic considering I've done almost nothing in the way of promotion. Heck, I'm thrilled that someone other than my mom bought a copy!

My hope is that the contest will launch Friday, but depending on the paperback's time frame, it might be Monday. Thanks so much for sticking with me - I really appreciate it!!!! I PROMISE you, this contest will be ah-may-zing!

Hint - anyone who is a fan of my Facebook page before the contest starts has a slight advantage. I want to reward everyone who's been sticking with me since the beginning. If you haven't followed me on FB yet, you can do so with the widget to the right.
Posted by Megg Jensen at 12:23 PM 6 comments:

Hey everyone, my Kindle & Nook editions of Anathema are up & running. What's even crazier is that I've had sales in the last couple days without even announcing them! CRAZY!!!!

Once the paperback edition is ready to roll, I'm going to start my big, awesome, epic contest!!!! I want to make sure everyone gets a chance to enter, even those who still want a paperback.

If you're interested you can pick up copies of my ebook for $2.99 at:

Email ThisBlogThis!Share to TwitterShare to FacebookShare to Pinterest
Labels: Anathema

Anathema, and its exciting sequel, Oubliette, are available now!
Posted by Megg Jensen at 12:20 PM 16 comments: 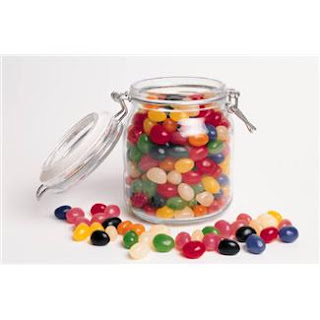