In the world of self-publishing, releases happen fast. Really fast. Some indies pump out a book or more a month. Not me.

When I burst onto the SP scene in early 2011, I already had three novels fully-edited and vetted, ready for publication (Anathema, Oubliette, Sleepers). During 2011, I wrote one novel and began a second (Severed, Afterlife). In 2012, I finished one novel and wrote a second (Afterlife, The Sundering). In 2013, I've written one novel and been working steadily on another (Shucked and the untitled work-in-progress).

Some days I feel as if I'm falling behind, but when I look at what I've really accomplished, I've been quite steady in my writing.

If the past is a predictor of the future, I should have a release before the end of the year. I'd love that to be true, but it may take a little longer. Here's why:

I'm not a math whiz, but even I know this means it'll take me double the time to write this book as it's taken to write the others. Not to mention I'm managing multiple points of view and a new world far more expansive than any I've ever written (including a custom map I've commissioned from Stefanie Verish). This book is the biggest, most exciting project I've ever tackled. Add on one of the most personally chaotic years of my life, and well, you've got one crazed author.

I'm excited about my upcoming novel. It's chock full of dragons, magic, new frightening beasts, a dangerous world, and plenty of enigmatic characters. So hang in there with me, readers. I'm working hard to bring you the most ambitious novel I've ever written!!!

Megg
Posted by Megg Jensen at 11:04 AM No comments:

Reveals, Promos, and Giveaways, OH MY!

Hey guys! I hope you've had a chance to visit my new website, www.meggjensen.com. It's completely updated, has a gorgeous new look, and it's got everything you need to know about me and my books.

Go on, take a peek, then come back.

Okay, okay, I know you want me to get on with it. What's the promo and the giveaway all about?

I'm setting The Song of Eloh Saga, my compilation ebook of all six of my fantasy novels (Anathema, Oubliette, Severed, Sleepers, Afterlife, The Sundering) plus the novelette (The Initiate) on sale for only $2.99 for the month of September at Amazon/Kindle, Barnes&Noble/Nook, Apple/iBookstore (I'll post the link here as soon as it's available), and Kobo. Yes, that's a $15.96 value for only $2.99. Crazy, right?

But I need your help in spreading the word. Here's how it works:

Use the Rafflecopter entry form below. It tells you all of the options you can use to spread the word about my big sale. Use the form to enter and I will choose a winner on September 12th.

What's the big prize? Signed copies of Anathema, Oubliette, and Severed in paperback. 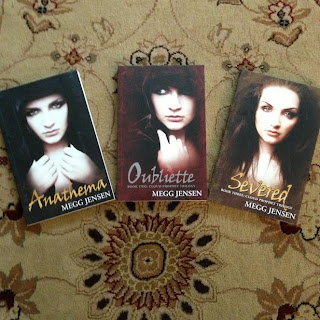 Enter below and have fun!

a Rafflecopter giveaway
Posted by Megg Jensen at 5:41 PM 2 comments: