Afterlife is OUT (and a CONTEST!) 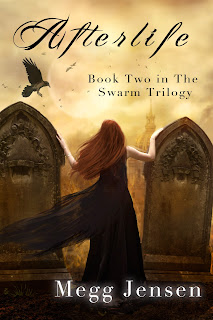 I cannot believe Afterlife is finally out in the world. Well, at least part of the world. You can find it on Amazon (US & UK) and Barnes&Noble, but the iBookstore, Sony, and many international outlets are slow to post.

In honor of its release, I'm selling Afterlife for only 99 cents on April 27th through April 29th on Amazon and Barnes&Noble. It goes to its regular price of $2.99 on April 30th. Why? I wanted to give my loyal fans a chance to get it for cheap. You guys are the ones who've been there with me, who follow me in various places (Facebook, Twitter, my blog). It's my little gift to you.

Yes, you know me. It wouldn't be a book release without some kind of giveaway. If you've been following me, you know I took my family to Universal Studios in Orlando for the first time. I have to say, the Harry Potter portion was pretty damn incredible. It's something I won't forget anytime soon. 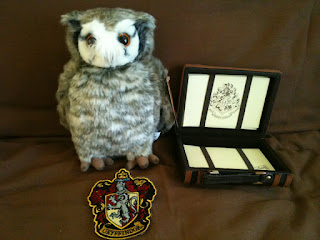 The best part? The souvenirs. I brought back a few for you!!!! One winner will get this really fun prize package - a stuffed owl (I think it's Pidwidgeon, but the tag doesn't specifically say so), a Gryffindor patch, and (what I think is the coolest thing ever because I bought one for myself too) a leather suitcase filled with Hogwarts stationary!!!!!

I'll also throw in some of my swag, but you know that Harry Potter stuff is way cooler anyway.

Enter below in the Rafflecopter widget. Yes, I'm having a little love affair with Rafflecopter!!!!

Thanks again so much for being a part of this journey with me. I love writing and I love that I'm able to make so many of you gasp, smile, and cry.

(the contest is open internationally!)

Okay, so Rafflecopter is having issues this morning. If it's working, use it to enter. If not, here are the ways you can enter - just leave a comment below to let me know which actions you took and make sure to leave me a way to contact you in case you win:

Who wants to win an e-ARC of Afterlife?

(an e-ARC is an electronic Advanced Release Copy)

Just enter in the Rafflecopter widget below!

Remember, even if you don't win, subscribers to my newsletter will get dibs on the first chapter of Afterlife next week, as well as information on release dates, sale prices, and secret info on my next contest (which is happening soon and is going to contain some pretty cool goodies)!

Something Exciting This Way Comes...

I'm always on the lookout for a new innovation. I'm digging epublishing, but I really enjoy getting in on new ideas.

My fellow Indelible and friend Cheri Lasota introduced me to the newest & coolest in e-book inventions: e-book cards from GreenersideDigital.com.

What is an e-book card? 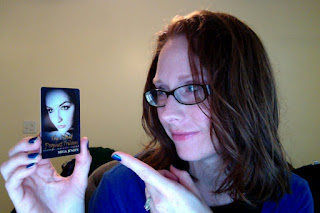 It's the size and weight of a credit card. One one side is my e-book cover, on the other there's a synopsis of the book, directions on how to claim your e-book, and a scratch off bar with a unique coupon code underneath. Just scratch it off, follow the directions, and you get a new e-book in .mobi (Kindle) or .epub (every other e-reader on the planet).

I really wanted to take advantage of this. How awesome would it be to be able to sell ebooks at author fairs while still giving the consumer something to hold in their hand? I can even sign the ebook cards too!

My only issue was deciding which book to make e-book cards for. They aren't cheap to produce and the minimum order was too high for me to even consider creating them for more than one e-book. After a day or so of wringing my hands, I realized how stupid I was. I didn't need to make an e-book card for ONE e-book. I could put the entire Cloud Prophet Trilogy (Anathema, Oubliette, Severed) on the card!

Now I'm able to sell ebooks anywhere I want. The entire trilogy goes for $7.99 on Amazon.com. I'm able to sell you the card for only $6.00 (including tax and shipping & handling). If you want to buy one, you can order it on the top right of the sidebar. :D

I hope you're as excited as I am about this new product!!!!!